On Saturday, Boeing (NYSE: BA) terminated a $4 billion deal that would have given it controlling of the commercial aerospace operations of Embraer (NYSE: ERJ) after a Friday night deadline came and passed without the two sides ironing out final details.

In press release, Marc Allen, president of Boeing’s Embraer partnership unit, called the decision “deeply disappointing” but said “we have reached a point where continued negotiation … is not going to resolve the outstanding issues.”

The termination, like the initial deal itself, is likely to be highly controversial, and the decision comes with both pros and cons for Boeing.

Why Boeing shareholders should rejoice

The world has changed a lot since these two longtime partners decided to join forces. In 2017, Boeing boasted a multi-year backlog, billions of cash on its balance sheet, and and a roadmap to further expansion. Archrival Airbus (OTC: EADSY) had acquired the small-jet C-Series line from Bombardier, and Boeing saw teaming with Brazil’s Embraer as a way to counter the C-Series threat and better compete in the small-jet space.

Boeing agreed to pay $4.2 billion for an 80% stake in Embraer’s commercial jet unit, a rich but fair valuation at the time. However, in the midst of the COVID-19 pandemic, which has caused travel demand to evaporate and left airlines ill-positioned to buy new planes, Embraer’s total market capitalization has fallen to about $1 billion.

As a result, heading into the weekend Boeing was nearing a deal to pay more than four times what investors currently feel the Embraer assets are worth. Even that Embraer valuation likely was inflated due to the pending deal. Embraer shares look set to plummet on Monday following Boeing’s decision to walk away. Boeing is also much less flush with cash than it was two years ago. International regulators’ decision to ground the 737 MAX in March 2019 is likely to cost the aerospace giant more than $20 billion in added expenses, penalties to customers, and advanced payments to keep the supply chain running.

The pandemic has only added to Boeing’s cash woes, causing the company to temporarily suspend operations and hurting demand for new planes. Boeing has suspended its dividend and has asked the U.S. government for $60 billion in support for the commercial aerospace sector. Given the scrutiny on the business right now, asking Washington for cash and then sending billions overseas to Embraer is probably a non-starter.

Buying Embraer, regardless of the price, is arguably a distraction Boeing doesn’t need right now. Furthermore, buying Embraer at the agreed price would have been a tremendous drain on scarce cash resources.

Why Boeing shareholders should be disappointed

In effect, Boeing pushed the C-Series into the arms of Airbus by aggressively attacking Bombardier’s sales strategy, accusing the Canadian company of dumping the product in the U.S. at a below-cost price. The C-Series, rebranded the Airbus A220, has attracted significant interest from customers, including Delta Air Lines and JetBlue Airways.

In recent years Boeing has tried to convince airlines to go with the smaller versions of its 737 instead of a plane the size of the A220, in part because it has no real alternative. Embraer’s new generation E2 jets would have slotted in below the 737, giving Boeing an attractive offering for customers looking for a plane that size. 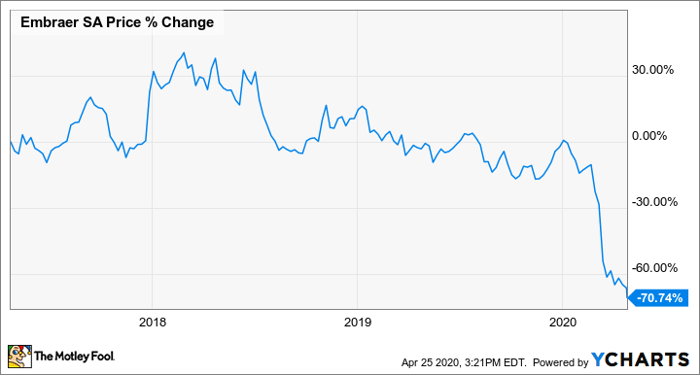 Unfortunately for Boeing, smaller-sized jets seem likely to be big sellers in the years to come. Prior to the pandemic, global airlines were already shifting away from larger jets and toward smaller planes. That trend is likely to accelerate if air traffic demand remains below pre-pandemic levels for an extended period.

The A220’s success has come in part because airline customers have been forced to wait and see what becomes of the Boeing/Embraer deal. Even combined, Boeing/Embraer faced an uphill battle selling the E2. Embraer is likely to find the challenge much more difficult on its own.

So how should an investor feel today?

Given all of the other issues facing Boeing, and the challenges of integrating massive, cross-border deals even in the best of times, existing investors should be glad this deal fell apart.

Ideally, the two sides can now return to the table and work out a compromise. However, that might be easier said than done. It appears the talks leading up to Boeing’s decision to terminate were tense.

For its part, Embraer doesn’t seem to be in a mood to compromise. The company issued a statement saying the deal was “wrongfully terminated” and pledging to “pursue all remedies” against Boeing.

“Embraer believes strongly that Boeing has wrongfully terminated the [master transaction agreement], that it has manufactured false claims as a pretext to seek to avoid its commitments to close the transaction and pay Embraer the $4.2 billion purchase price,” the company said. “We believe Boeing has engaged in a systematic pattern of delay and repeated violations of the [master transaction agreement], because of its unwillingness to complete the transaction in light of its own financial condition and 737 MAX and other business and reputational problems.”

Which means, in the near-term, Boeing has one more thing on its plate. For potentially the rest of the decade, Boeing’s commercial fortunes largely will be dictated by the success of the still-grounded 737 MAX.

Boeing is focused on survival. Survival is good, but investors should be aware: the price for survival might be a lost decade in terms of commercial sales. My advice: stay clear of Boeing stock.

10 stocks we like better than Boeing
When investing geniuses David and Tom Gardner have a stock tip, it can pay to listen. After all, the newsletter they have run for over a decade, Motley Fool Stock Advisor, has tripled the market.*

David and Tom just revealed what they believe are the ten best stocks for investors to buy right now… and Boeing wasn’t one of them! That’s right — they think these 10 stocks are even better buys.

Weighing The Week Ahead: So Many Good Questions, So Many Poor Answers

Artificial Intelligence and the Economy in the 21st Century