The auto business may be in the biggest transition period we’ve seen in decades. Sales in the U.S. and Europe are expected to plunge 60% to 80%, according to LMC Automotive, which follows a more than 40% drop in March. The economic slowdown caused by COVID-19 could also have a long-lasting impact on the workforce, with 26 million people filing for unemployment in the last five weeks alone.

Automakers such as BMW (OTC: BAMXF) (OTC: BMWYY) and Tesla (NASDAQ: TSLA) have shut down plants and are trying to save as much money as possible, but it’s going to be a rough road ahead. Here’s how I think these two companies will handle the challenges, and which one is the better stock for investors when the economy recovers.

Let’s start with BMW’s and Tesla’s fundamental operating conditions. BMW generates over four times the revenue Tesla does, but less than double the operating cash. 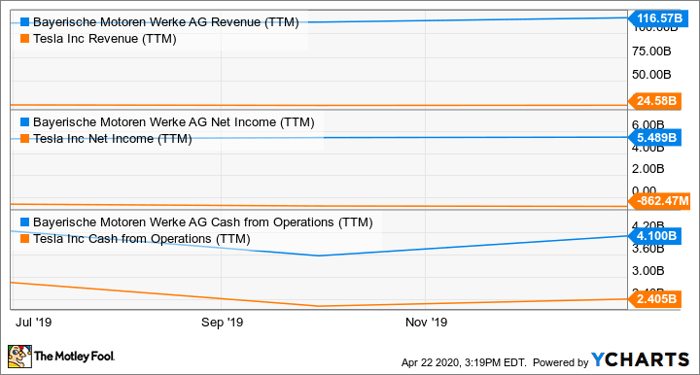 These companies are a little difficult to compare because Tesla is in hyper-growth mode (by auto standards), while BMW is an established manufacturer growing single-digits per year at best. Still, it’s important to see the scale at which they’re operating and how much money they’re making.

What are consumers going to want in 2021?

Let’s move beyond the current year’s economic crisis and look forward to 2021. By the look of it, high-income families will be less affected by the current crisis than lower-income earners, which helps both companies given their high-end products. That’s the good news.

Tesla has a rabid fan base, and first-quarter production of 102,672 vehicles and deliveries of 88,400, including the rapid ramp-up of Model Y manufacturing, is impressive. But it’s not production I would worry about with Tesla; it’s demand and the balance sheet that could be a bigger problem. And BMW could be a challenger to demand for a couple of reasons.

The one edge BMW may have is that its gasoline-powered vehicles may get a boost from extremely low gasoline prices. Tesla has touted the cost savings electric vehicles provide, but that advantage may be minimized now that gasoline is below $2 per gallon in most of the country.

At the same time, BMW is moving Tesla’s direction by developing more electric vehicles. Management said it already has 500,000 “electrified” vehicles on the road and aims to have over 1 million by the end of 2021. With the iX3, i4, and iNEXT all due to hit the road by the end of 2021, we could see BMW being the next growing EV manufacturer.

We don’t know exactly how demand will trend given the current economic slowdown. But we can assume demand will generally fall, and that means automakers will have to rely on their balance sheets to stay alive.

Let’s focus on cash on the balance sheet for now, since that’s what will get auto companies through this crisis.

You can see below that BMW has much more cash, but since its last earnings report, the company has sold $220 million of debt in Germany and has an 8 billion euro revolver available as well. It has plenty of liquidity to get through a bad 2020 and emerge safely on the other side. 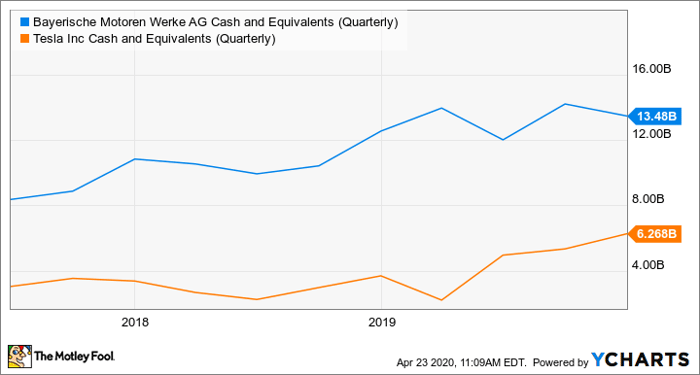 Tesla also sold $2.3 billion of stock in February, further shoring up its balance sheet. Even with the cash costs of shutdowns and slower sales, Tesla may have enough cash to survive the crisis as well.

The end of Tesla’s ZEV windfall?

I will also note one strange side effect this crisis could have for Tesla. In 2019, 2018, and 2017, Tesla recognized $594 million, $419 million, and $360 million in ZEV credits, or zero-emission vehicle credits sold to other automakers. These credits are meant to entice competing automakers to produce electric vehicles, but they’ve also been a huge source of cash for Tesla.

However, falling sales by competitors will reduce their need for ZEVs, and their own increased production of electric vehicles could cut ZEV demand even further. The problem is that more than half of Tesla’s free cash flow in the past year was from ZEVs, and looking back three years, it would leave a $1.4 billion hole in the balance sheet. 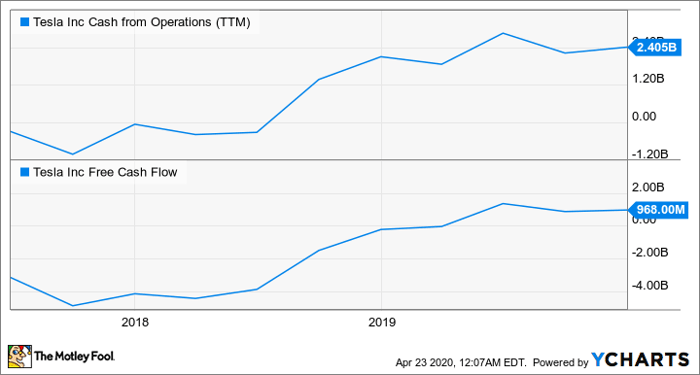 If this source of cash dries up over the next couple of years, it could seriously hurt Tesla’s cash flow.

It’s all about value

There are a lot of moving parts for both BMW and Tesla in today’s economic environment, but given their high-end customers, high margins relative to competitors, and solid cash levels, I think they’re both built to endure through the crisis.

That just leaves the matter of what investors should pay for the stocks, and that’s where I give BMW a huge advantage. You can see below that BMW is worth just over a quarter of what Tesla is, despite being far more profitable and generating more than four times the revenue. 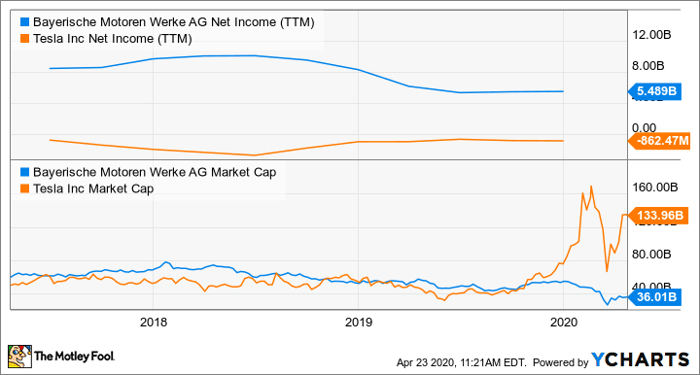 Tesla is definitely a disruptive auto stock and will likely outgrow BMW over the next decade, but to me, the price is too high, and that’s why BMW wins out today.

Tom and David just revealed their ten top stock picks for investors to buy right now. Tesla is on the list — but there are nine others you may be overlooking.

The Power of Now: A Guide to Spiritual Enlightenment

(17201)
$10.02 (as of October 23, 2020 - More infoProduct prices and availability are accurate as of the date/time indicated and are subject to change. Any price and availability information displayed on [relevant Amazon Site(s), as applicable] at the time of purchase will apply to the purchase of this product.)

The Gifts of Imperfection: Let Go of Who You Think You're Supposed to Be and Embrace Who You Are

(11773)
$8.97 (as of October 23, 2020 - More infoProduct prices and availability are accurate as of the date/time indicated and are subject to change. Any price and availability information displayed on [relevant Amazon Site(s), as applicable] at the time of purchase will apply to the purchase of this product.)

Northern Vs Southern California – Where Is Better Land Investment?

Chakra Healing: A Beginner's Guide to Self-Healing Techniques that Balance the Chakras

(5727)
$8.99 (as of October 23, 2020 - More infoProduct prices and availability are accurate as of the date/time indicated and are subject to change. Any price and availability information displayed on [relevant Amazon Site(s), as applicable] at the time of purchase will apply to the purchase of this product.)

Be Water, My Friend: The Teachings of Bruce Lee

(63)
$22.18 (as of October 23, 2020 - More infoProduct prices and availability are accurate as of the date/time indicated and are subject to change. Any price and availability information displayed on [relevant Amazon Site(s), as applicable] at the time of purchase will apply to the purchase of this product.)

How To Win Friends and Influence People

(27303)
$12.99 (as of October 23, 2020 - More infoProduct prices and availability are accurate as of the date/time indicated and are subject to change. Any price and availability information displayed on [relevant Amazon Site(s), as applicable] at the time of purchase will apply to the purchase of this product.)

Daring Greatly: How the Courage to Be Vulnerable Transforms the Way We Live, Love, Parent, and Lead

(3518)
(as of October 23, 2020 - More infoProduct prices and availability are accurate as of the date/time indicated and are subject to change. Any price and availability information displayed on [relevant Amazon Site(s), as applicable] at the time of purchase will apply to the purchase of this product.)